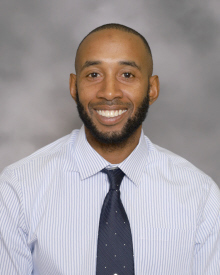 We are excited to announce that coach John Boswell will be the new head boys basketball coach at Morrill High School!! Congratulations and welcome to the PRIDE!!!!!

John W. Boswell, II
Coach Boswell was born and raised in Illinois. He graduated high school from Cary High in Cary, NC.
He received his Bachelor's degree from Missouri Valley College in Marshall, MO
While attending Missouri Valley College he played basketball from 2003-2005.
Coach Boswell received his Master’s degree from the University of Texas at Arlington in Arlington, TX.

John is married to Jessica L. Boswell. They have four children: Ali Boswell will be golfing at William Jewel College in the Fall. Tre Boswell is in middle school, Aubree Boswell is in fourth Grade, and Ezekiel Boswell is attending Pre-school.

"I want to thank Coach Guerue and Coach Lofink for bringing me on staff. I also want to thank Morrill Public Schools for giving me the opportunity to be a Lion. I am looking forward to continuing to build on the foundation that was established by the former coach, while adding my personal touch and style moving forward."